Ribbon Cutting for the opening of the Hook Mountain Summit Trail.

Stonehenge took longer to build but it wasn’t any less difficult than building the new mile-long Hook Mountain Summit Link hiking trail that required 8 years of effort and moving tons of the same type of rocks that make up Stonehenge. Members from ten organizations who worked on the trail held a public ribbon cutting on June 18, 2021, at Nyack Beach State Park, one of only 602 National Park Service designated “National Natural Landmarks” in the United States, under the shade of plane trees and a breeze off the Hudson River. It took more than a village to make the trail happen, which winds through a unique talus slope ecosystem at the foot of Hook Mountain. 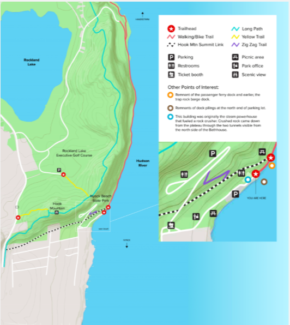 The trail crosses land owned by the sisters of Marydell until 2017 when they agreed to protect 30 acres from development by ensuring it would become a part of the state park system. The trail would not have happened without the sisters of Marydell wanting to ensure that Marydell remain a natural space free of development. Volunteers from many organizations shared a two-fold mission, to forever protect the base of Hook Mt. from development and to build a new trail.

The original, white-blazed trail connector between Nyack Beach State Park and the Long Path, a blue-blazed trail that passes through Nyack and over Hook Mountain, used Upper Nyack village streets to connect Nyack Beach with the Long Path. The new trail creates a woodland walk. According to David Neil, Board Chair of The Friends of Rockland Lake & Hook Mountain, “it’s much more than a ‘linker’ path. It’s a magnificent blending of nature and human ingenuity.” The new trail is challenging but the rewards along the way and atop Hook Mountain are many. 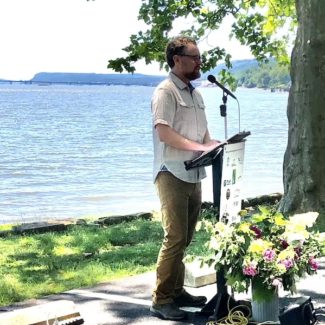 David Neil speaking at the grand opening of the Hook Mountain Summit Trail.

In the center of the 8-year project is David Neil, an Upper Nyack resident, law trained-businessman, and head of the Friends of Rockland Lake & Hook Mountain.  Neil is a practical, can-do conservationist and family man who can be found on the trails or on a mountain bike at Nyack Beach. His day job in real estate as a principal with The Durst Organization, also a funder of the project, along with his previous position as Co-President and COO of the New York Water Taxi provided him the unique skills needed to negotiate a complex set of arrangements and covenants with many different partners. Fortunately, most shared a common interest in preserving the land. His efforts are reminiscent of Upper Nyack lawyer and preservationist, J. DuPratt White who helped raise funds for acquisition of Hook Mountain State Park and Nyack Beach (along with other PIPC parks) 100 years go.

Sponsors who participated in the the creation of the Hook Mountain Summit Trail.

The Friends of Rockland Lake & Hook Mountain (Friends) is a nonprofit volunteer organization dedicated to supporting the preservation of the local history and natural resources of Rockland Lake, Hook Mountain, Nyack Beach State Park, and Haverstraw Beach State Park totaling some 2,000 acres and creating awareness of the parks by the public. The Friends under Chairman David Neil were critical in the acquisition of 30 acres of new parkland at the base of Hook Mt. from the Marydell Faith and Life Center helping ensure that the lower part of Hook Mt. would remain forever green and within the public trust. An additional 10 acres is held under a conservation easement. “Our mission was, and is, to enhance the experience of park visitors, while protecting these public lands,” said Elizabeth Co, President of the Friends of Rockland Lake & Hook Mountain. “The new trail accomplishes that beautifully.”

In addition to Neil and Co, the board consists of Bob Stien, an Upper Nyack resident near Hook Mt. who has been a tireless advocate for the environment, Diana Cutt, geologist with the Environmental Protection Agency, Robert Mayer, author of Rockland Lake, Hook Mountain, and Nyack Beach, Ben Weiland, a lawyer involved with the sister’s acquisition, Bob Mayer, President of Essential Apparel, and Everard Findley, a brand consultant and communications chair of Grow NYC. 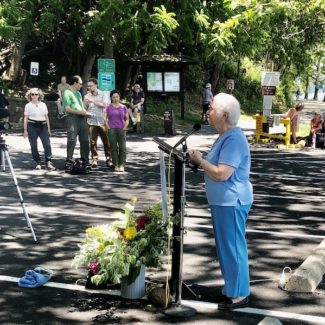 Sister Eileen from Marydell speaking at the grand opening.

The Sisters of Our Ladies of Christian Doctrine came to a 100-acre property in 1924 to found Save-A-Life farm dedicated to improving the mental and spiritual health of those in need. For many years the sisters held summer camps for inner city children so they too could experience the harmony of nature.  Campers and camp counselors formed lifelong memories of their time together hiking on Hook Mountain, swimming in the Hudson River, tending milk cows, taking hayrides, and enjoying campfires. Over time the sisters have lowered the former farms footprint to today’s 10+ acres including summer camp buildings, the Sears Kit Barn from the 1920s known as Kateri Lodge, and a convent house. The sisters have been tireless advocates for the environment and the special spiritual qualities of Hook Mountain that date back to the indigenous people who once lived and died here. Today Marydell Faith & Life Center conducts numerous programs including garden programs and summer day camps for children under the guidance of a board of directors.

An 8-Year Journey from Private Land to Hiking Trail

The 8-year journey to protected parkland happened over 6 distinct phases. 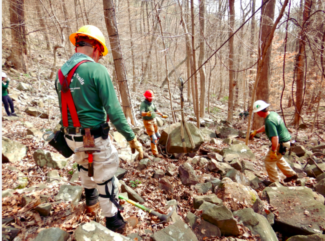 The trail crew at work lifting a boulder on the Hook Mountain Summit Trail.

According to Dave Booth of the all-volunteer trail crew, a part of the NY-NJ Trail Conference that builds and rehabilitates hiking trails in the west side of the Lower Hudson River Valley, it was the hardest trail to build they’d ever done including ones in the Catskills. Booth explained that when they first got to the site it was a jumble of rocks, “we had a dozen people standing in six square feet with no place to go and had to make sense of it.” The crew has been at work continuously since late 2018 with a pause in 2020 due to the pandemic. Six to twelve people work at a time depending on availability.  To move huge rocks the crew attaches a highline between two trees called spar trees. Two lines come off the spar trees to anchor trees, one line is static and the other is attached to a grip hoist or come along that tightens the highline lifting a rock. The rock is on a pully and then moved. The crew moved tons and tons of rock over nearly 36 months of work.

Video by Marty Costello of the trial work in progress

Sign at the the beginning of the trail at Nyack Beach State Park.

The triple-blazed trail begins (or ends depending on where you start) at Nyack Beach State Park. The beginning follows what was called the Zig Zag trail that leads uphill via switchbacks to the plateau.  The Zig Zag trail was probably once built to take people, horses, and equipment to the plateau that was the working face of a major quarry that operated at the turn of the 19th century. The trail beginning, only steps from the bathhouse and parking lot, is marked with a sign and triple white blazes.

The Zig Zag trail crosses an asphalt road that leads to the plateau and then enters the woods on the new trail along the mountain base. The hiker is soon absorbed in the unique talus slope ecosystem formed by large boulders that have fallen from the exposed vertical face of the Hook. The path is shady in summer under relatively mature hardwoods. The trail winds up, down, and around the base and one quickly learns to appreciate the trail crew’s work. Without their steps, stairs, bridges, and packed earth, the way would be nearly impassable. 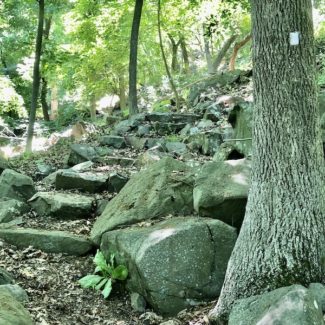 The quiet of the link is singular and only broken by bird songs. One can almost hear the scamper of deer that are surprised by human intrusion. Wind is usually light in the lee of the Hook producing a meditative calm so rare in daily life. Hiking here is like Tai Chi, one moves slowly and intentionally seeking balance moving from stone to stone. A walking stick is a good companion.

In places an old farmhouse and the Sears Kit Barn on the Marydell property are glimpsed as the trail skirts their current property. Another uphill greets hikers as the trail ascends by steps to the blue blazes of the Long Path (as of this writing the connection is still being completed.) 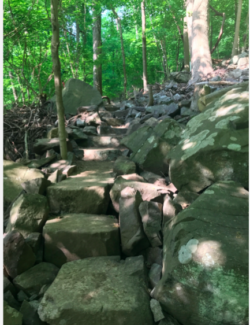 End of a stone bridge over a small creek and stairs.

The Long Path at this point follows the narrow original road over Hook Mountain parallel to 9W. Just above where the summit trail meets the Long Path is a horseshoe-shape turn known as Barmore’s horseshoe, named after a resident who lived near the mountain top. One can still make out the horseshoe where the Long Path turns east toward the Hook. 9W is just above it.

The old road and the horseshoe turn show how much our ancestors overcame in creating our current infrastructure. It was a road built by hand and oxen that was true to the landscape. Today the Hook Mountain Summit Link is a stone monument on the same principle, a route through a unique ecosystem that was built with the same Herculean efforts of building Stonehenge, a monument that hikers will enjoy many generations from now.